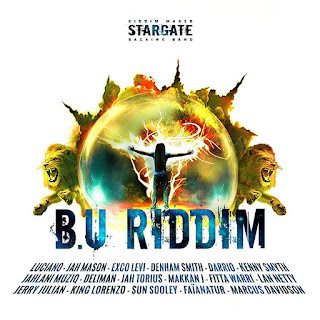 Stargate Backing Band present their first project, the B.U Riddim. A title that is a declaration of intent: pronounced "be you" like "be you, do not cheat, be yourself". It simultaneously symbolizes their desire for accomplishment and realization through their first production.

The album release coincides with the new video clip for True To The Music by Luciano ‘The Messenjah’ - the flagship artist of the B.U Riddim project. This track is a hymn to the melodies and groove of reggae music, Jamaica's real heartbeat, its mysticism and fostering of positive sentiment across the world since its inception.

The video was directed by Romain ‘Sherkhan’ Chiffre and features the famous dancer-choreographer Orville ‘Xpressionz’ Hall, artistic director of the Xpressionz theater and judge of Jamaica's number one dance TV series Dancin' Dynamites. In the video, Hall embodies the role of an elder in a comedy that immerses us in the everyday conflicts of the protagonists George and Esmeralda. Both entertaining and captivating, these two octogenarians, immobile and inseparable, rediscover their youth, kinship and  love for dancing while listening to the True To The Music track.

The album was mixed by Denis Terry at Studio K and mastered by Olivier Planchard at Middle Side Mastering, both privileged partners of Stargate Productions. The B.U Riddim album is available on all digital platforms with distribution by Dibyz-Music and soon also at stargatebackingband.com in CD digipack format.


Pubblicato da Reggaediscography a 7:39 AM
Email ThisBlogThis!Share to TwitterShare to FacebookShare to Pinterest